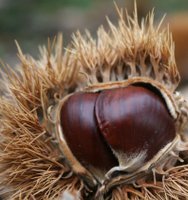 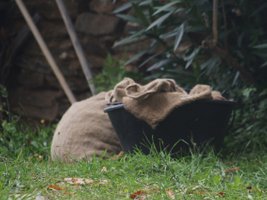 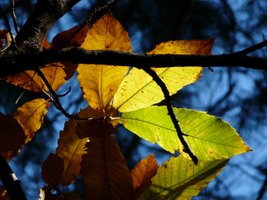 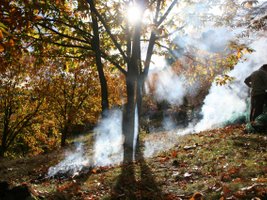 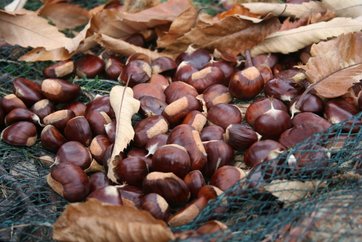 Our holiday house is situated amidst a chestnut grove.

The chestnut species in our garden is the Bouche Rouge (Red Mouth), sung about by Jean Ferrat in his famous song

Most of the chestnut growers have a full time job as fruit growers or as animal breeders.

The Ardèche region is the principle chestnut growing area of France, 50% of the total national production of chestnuts comes from the Ardèche department, which equates to 5000 tons of chestnuts out of 5 to 6000 hectares from three main growing areas.

The chestnut plays a big role in the income of the local farmers. It can reach between 20% and 60% of their income. Sometimes it can be the full 100%.

Most of the time a chestnut grove can only be cultivated on the sloped areas and terraced gardens.

These terraced gardens are called “faïsses or faysses” by the locals.

In 2006 the Ardèche chestnut was awarded the AOC label.

The AOC label (Appellation d’Origine Contrôlée) is an official French quality label, which guarantees the region of origin, as well the quality of the product itself.

The AOP (Appellation d’Origine Protégée) is a European Certificate, which was awarded on

On top of the AOC the chestnut is a protected product.

The European Commission describes the Ardèche chestnut as:

“ A chestnut originating from old local species, most of the time grown on sloped areas made into terraced gardens, in the West of the Rhône valley, bordered by the Massif Central, and generally known by its typical taste of  brioche, pain au lait (bread pudding), potimarron (pumpkin), sweet potato and honey.”

For these three products all the production steps have to be made in the region enclosed by the AOC/AOP. Control of the production process is guided by a manual, which contains the traditional and definite specifications.

The Ardèche chestnut AOC/AOP includes 65 traditional species, which are characterised by a good weight, calibre and recognisable taste. They are full of sugar and tasty.

When you are visiting the Ardèche region in autumn you will undoubtedly be tempted to pick up the chestnuts which are on the roads or in our garden.

Please do not pick them up without the permission of the grower/owner !

The chestnuts are cultivated by the farmers and are a part of their income resulting from their hard work. Please respect this !

(free interpretation of a leaflet of the Ardèche tourism office)

The life cycle of the chestnut :

From December until April : The chestnut tree loses its leaves. (Vegetative resting period).